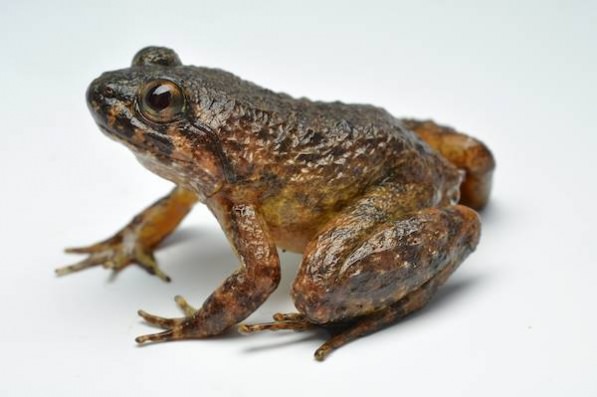 Limnonectes hikidai has until recently been known as L. laticeps. It is a brown medium sized frog, around 31–37 mm (males) and 34–40 mm (females) in snout-vent length. The head is quite broad in males.

L. hikidai is similar to L. kuhlii and the exact systematic relationships of this species complex still require further research for resolution. Both species are generally brown with variable hues and patterns, and the skin has a characteristic network pattern of skin ridges. However, kuhlii grows bigger, prefers rocky bottom streams, and has fully webbed toes — not fully webbed in hikidai: usually three phalanges free of web on fourth toe.

This species lives along the edges of small, slow soft-bottom streams in swampy areas. It appears to be restricted to low elevations below 500 m asl.

The call is a single note and resembles a duck’s call.

At the current state of our knowledge, genetic methods are the only option to identify laticeps tadpoles. Currently, we do not have solid enough evidence to present images of L. hikidai tadpoles.

In general, the details of its reproductive biology have not been studied in detail. Males call from small streams with soft bottom, most of the time sitting in shallow water, often from under leaf litter in or near the stream. According to Inger (1960) clutch size is 20-45.