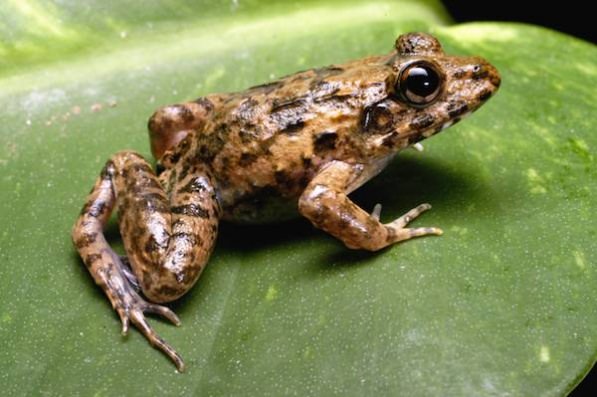 Fejervarya cancrivora, the Crab-eating Frog, inhabits coastal habitats such as shore-line, disturbed habitats and mangrove, but can also be found several km away from the coast.

It has conspicuous longitudinal ridges on the back and round bumps at the flanks. The general coloration is in shades of brown, grey above with clear, dark markings. There is an interorbital marking, 4–5 cross bars on the legs, and contrast rich facial markings. A medial stripe is absent from the dorsum. Toe webbing always reaches beyond the las subarticular tubercles on Toe III and Toe V.

is unique among all frogs in that it has the highes salt tolerance of any amphibian. In fact, it can survive in salt water higher in concentraton than sea water. Reproduction happens in all kinds of flooded coastal areas, swamps, marshes, and ditches. The small eggs float in their jelly as surface film. Tadpoles are similar to those of F. limnocharis but with dark tail markings.

The image shows an juvenile from Sabah.