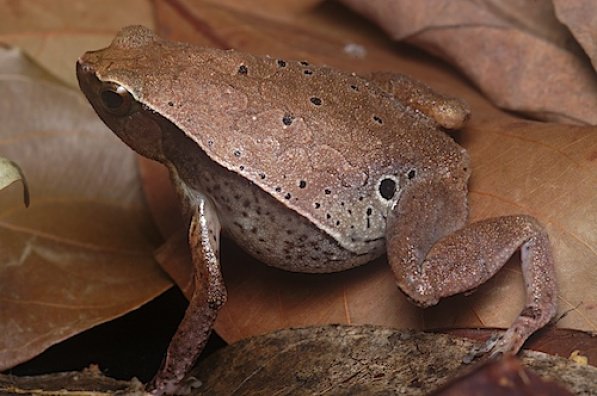 Kalophrynus meizon was formerly known as K. pleurostigma that turned out to include several species (Zug 2015). It is a stocky frog living in the leaf litter in lowland rainforest. It reaches 40 mm snout-vent length in female, males remain smaller.

The faceand flanks are dark brown, whereas the dorsum is lighter in tone. Dorsum and flank are separated by a light, thin stripe. An ocellus spot is present in the groin. Smaller black spots are scattered on the back. The dorsal coloration mimics dead leaves. The eardrum is visible but not very conspicuous.

The abundance of this species has not been studied. Maybe it is common locally, but we only encoutered it occasionally.

Like other Sticky Frogs this species prefers walking to hopping. When molested, sticky frogs secrete a sticky white substance from their skin. Inger and Stuebing (2005) describe K. meizon as a specialized ant eater. This might be true for all species in the genus but needs corroboration in the future.

We do not have images of fully grown tadpoles. The image shows a early hatching stage still having adhesion glands. Interestingly a limb bud is well developed at this early stage. The specimen was identified by DNA matching.

other links of interest